WHAT IS UP WITH THE WEATHER?

I have been told that if you don't like the weather in Alabama wait a day and it will change. Well this past weekend we went from sub-zero temperatures on Saturday to running in shorts and t-shirts on Sunday. Lucky for me I had some company doing my long ride on Saturday. I am used to doing almost all my training solo so it was great to hear that fellow Xterra athlete Craig Evans and friends were coming into town to do some mountain bike training at Oak Mountain. The group ended up being six strong: myself, Casey Fanin, Craig, Billy Pirtle, Scott Mills, and I ashamed to admit a friend of Scott's whose name I can't remember. Unfortunately JR is still taking it easy with a bulging disk and couldn't join us. He is just about going stir-crazy hanging out a home while everyone else gets to go outside and play. 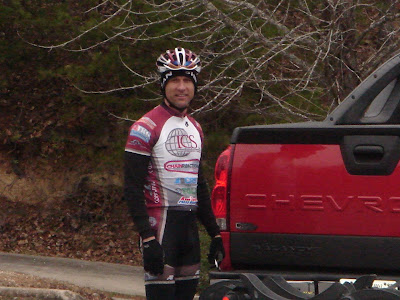 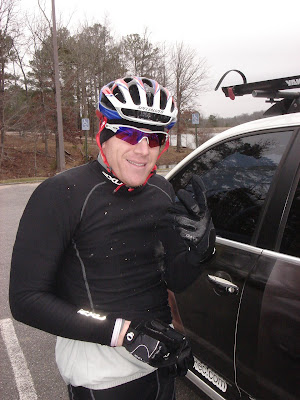 Craig and his supercool new ride -with his picture on it and everything! 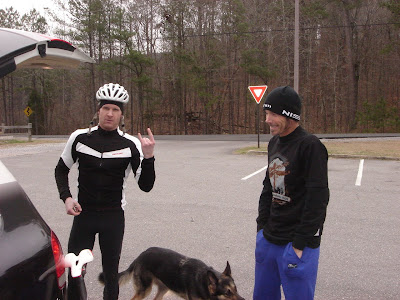 Casey decided to head out on a run with his trail loving doggie while the rest of us rode a lap. Craig claims he is fat and out of shape but his taking it easy is still apparently faster than base riding so he and Scott took off. As such I missed as Craig described - front row seats - to Scott's second crash of the morning. Quote "we were bombing down the trail and all I saw was two wheels about a foot and a half off the ground, then nothing but ass going over the bars". Thankfully Scott made out with a bruised knee and a very flat front tire, unfortuately I didn't have my camera with me to catch it. Craigs advice, when you are going that fast it is usually a good idea to keep at least one wheel on the ground. My strategy has been to never go that fast in the first place, but I will need to work on that if I want to keep ahead of the girls this year. One of my big goals this winter is to master blood rock, a technical section of the trail at Oak Mountain, site of the Xterra Southwest Cup. It's not really that scary but I seem to have a mental hang-up about it. Craig gave me some great pointers and I made it halfway down. Next week it's all the way. Second lap out Casey joined Craig and Scott for a hard lap while Billy and I backed off a bit and rode more aerobically. Craig and Scott started a third lap but decided it was too cold and called it a day.

The guys headed home after the ride and I headed to the pool. Sunday, the weather turned out bright, sunny, and warm which made my long run great and wouldn't you know it today, Monday, it is snowing. Go figure.

Posted by Christine Jeffrey at 7:57 PM No comments:

The consensus seems to be that since I'm from the north where it is cold that it must be my fault that we are having record cold weather down here in Alabama. Now, however cool it might be to control the jet stream, I'm afraid I can't take credit for it and if I could I certainly wouldn't bring the cold weather to my training camp. I can't complain too much as every email I get from home begins with "it keeps snowing" but that didn't stop me from being completely miserable riding in below freezing temperatures wearing every piece of clothing I brought with me. Other than the weather training is going well. Saturday I headed out bright and early for a local 10mile road race. I don't usually do races for training as I have a hard time not getting caught up in the race and going to hard but I couldn't resist joining some local runners for my long run. Otherwise it is just the standard base workouts that we all know and love. I finally found my camera battery changer so hopefully there will be photos coming soon. Later CJ
Posted by Christine Jeffrey at 8:16 PM No comments:

It was supposed to be Happy New Year, a fitting start to my new blog, but that day seems to have past me by. So Happy New Season it is, although that was officially yesterday it will have to do. The new year past me by as I was busy trying to figure out everything I needed for the next three months, then trying to figure out how much of it would fit in my Toyota Echo. Thankfully most of it did, though accelerating on uphill freeway ramps no longer was a possibility. After two days of driving south and leaving all the cold, snowy weather behind, I am here in the deep south staying with my good friend, and fellow Xterra triathlete JR at his home in Alabama. Unfortunately it seems as though some of the bad weather has followed me down and it has been overcast and raining for the past three days and the tornado sirens have been going off all afternoon. At least its warm and wet is still better than riding my trainer and running on the treadmill. I am very excited for this upcoming season, mostly because not only am I healthy and way ahead of where I was this time last year but I finished off last season healthy with a great race at the Xterra World Championships. It has been at least three years since I have been able to finish a season without injury ending it early. It seems a bit late to do a review of the season, so just a quick thank you to Gareth Thomas my coach who not only puts up with me but keeps me on track and training and racing at my best, Kevin Weitzel and everyone at Tribe Multisport in Tempe for all their support, and Brent Ruegamer at Ruesports for the awesome TT bike which I will hopefully race on more often this year. So here it is my first blog, not terribly exciting, but hopefully this will keep everyone up to date throughout the season with what I am doing, something I am really not very good at. Best wishes for the New Year and New Season, CJ
Posted by Christine Jeffrey at 1:35 PM No comments: