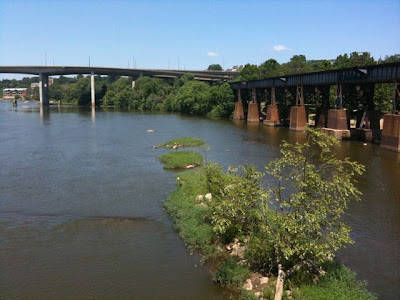 JAMES RIVER - Photo by Emma Garrard
Just getting ready for the second race in back to back weekends with crazy travel between. The course in Richmond is unlike any other we do in the Xterra series as it is literally located right in the middle of the city. The swim (or what passes for a swim here) is in the James river. The river is running fairly high this year which means that we will swim most of it instead of beaching ourselves on the rocks or sand bars multiple times. It is about a 500-600m swim across to a small island, a short run across the island and the swim back. With the run into transition it might take us at the most 15minutes. Usually this has me more than a little upset since my chance to put time on the other girls is greatly diminished but this year the bike course has totally changed.
Two years ago I did this race for the first time and was nothing short of a train wreck. I didn't have the skills to ride a lot of the technical urban style trails: ramps, drops, rock gardens, skinny bridges, and nearly cried during the pre-ride. I got through the race, barely, spending a lot of time off my bike. This year we arrived in Richmond to find the trails had been completely redone, lots of the technical sections have been blocked off and the rest of the trails buffed out and totally smooth. Add to that we are running the course backwards this year which makes most of the really steep uphills downhills. The course has also gotten seriously shorter to a lightning fast 18km or so. The guys will definitely be under an hour and the women not much over, yeah for me!!! They also decided to cut out the last section of singletrack on the run making the whole race almost a sprint distance. Should be exciting, though not everyone is excited as I am about all the changes. Considering the forecast is 98deg. tomorrow, shorter might not be a bad idea after last weekends meltdown in Bama!!!
Posted by Christine Jeffrey at 2:46 PM No comments:

So the race on Sunday wasn't what I had hoped for and it's been crazy non-stop since then. I knew the weather was going to be hot but I really thought that I would be able to handle it better. Race morning came around and I got through the whole routine smoothly and relaxed. There was plenty of room at the swim start even though it was a mass start with all the pros and amateurs together. 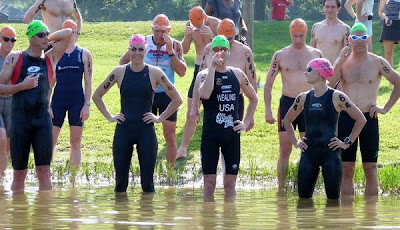 Emma, Seth, myself and Conrad chose to start off to the right with Craig and Bruce Gennari opting for the left side. Seth decided not to wear the overheating suit (aka swimskin) which in hindsight was probably a good idea. Conrad tried the ice in the swim cap but apparently it melted long before the first buoy. The swim specialists all ended up coming together at the first buoy of the two lap swim, then Craig pulled the first lap and the two of us did the short run around the flags together heading into the second lap while Seth, Conrad and Bruce had fallen off the pace a bit. I ended up pulling the second loop even though with the water temperature in the mid-eighties I felt like my head was going to explode. I kept telling my arms to pick up the tempo but the message just wasn't getting through. I think just about everyone was feeling the same way. 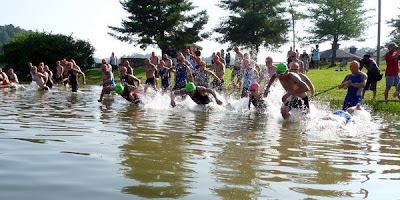 I then had probably the slowest transition of my life and got out onto the bike. It wasn't all that hot once we got under the canopy of the trees and out of the sun but my legs just didn't seem to have anything. Mel was about 2min back of me out of the swim and passed me early on in the single track. Then the Shonny, Leslie, Renata train came flying by up the long uphill climb (I think Will Kelsay got himself in the middle of that one, on his way to a great 6th place finish) That was about a third of the way through the bike leg. The rest of the bike I just tried to keep the pace going as best I could without totally blowing the legs. I knew Emma wouldn't be far behind and with one of the hardest runs coming up I knew that I needed every second. As it turns out, Emma posted the fastest run of the day for the women and went by me halfway through the run and almost caught Renata. I totally melted on the run. The first half is along the singletrack that we started the bike on, then the second half is nothing but straight up and down steep ridges for 5km. It was all I could do to walk up the climbs and keep my legs moving. It didn't help that there was probably half the water stations the course needed judging by the number of people in the med tent after the race. 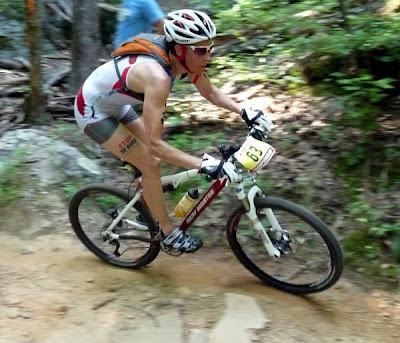 The finish line finally came and it was over, done with a 6th place finish. Shonny once again showed that she has gotten this Xterra thing down taking the win and an amazing 6th place overall, followed by Mel, Leslie, Renata, and Emma.

You would think the drama was done for the day but no... I decided since I had a long trip home after the race to get back to work on Monday that I needed a long cooldown. Mark Rudder (my Atlanta training homestay) and I headed out for a 30min spin on the bikes during which time Renata nearly took her big toe off getting it caught in her chain ring while warming down. I got back to the car to pack things up only to find Ryan running around like a crazy person trying to organize getting Renata to the hospital. The next 3hours involved me trying to find another ride back to JR's to get packed up, realizing that half my stuff from transition had gotten put in Renata's bag and was on its way to the hospital along with my bike, then getting all my stuff organized for Ryan to drive over to Richmond, and laying out Renata's stuff that had gotten put in my bag to make sure she got it back, and finally rushing to get a ride to the airport with Matt Boobar and catching my 5:30pm flight home. All with a serious case of low blood sugar and an upset stomach. The day finally ended after a 4hr drive home from the airport in Detroit - 3am, not a happy camper.

It's now wednesday afternoon, well early evening, and after three days of work and very little training I am headed back to Detroit to start the craziness all over again (in reverse) for the race in Richmond this Sunday, gotta go!!!

Posted by Christine Jeffrey at 1:29 PM No comments:

It's pre-race night here in Birmingham Alabama and I'm just getting the last things prep'd for tomorrow's Xterra race. Love this course, especially since I spend the winters here training but it is going to be a hot one tomorrow, 90+ degrees with lots of humidity. On top of that, the water temperature is mid to high 80s so hot, hot, hot. Drove down with Ryan DeCook on Thursday (10+ hours) after driving into Detroit wednesday evening (4hours) thankfullly Ryan wanted to drive so I slept a good portion of the way. Got some good pre-riding/running in on the course the past two days and even helped out with the kids xterra for a bit this afternoon. It is surprisingly hard to swim while holding a ten year old afloat, but it saved him from getting pulled in the boat and he got to finish the race. Check out my pre-race video interview with Xterra!!! http://www.facebook.com/video/video.php?v=430910668622
Posted by Christine Jeffrey at 6:15 PM No comments: