Swim... who needs a swim

Me usually, but Sunday at the Desert Classic duathlon I had no choice but to do without. The weather has been absolutely georgeous here in the Southwest, that is right up until I packed up the car for the drive to Phoenix. I was really feeling for all the MTBers dealing with the epic conditions at 24hrs in the Old Pueblo. I got in the car mid-morning and hit a full on sand storm just outside of Tucson. Crazy winds and zero visibilty to the point of trucks being blown off the road. I have to admit that I was having a bit of a panic moment with visions on me being blown off the road trying to ride a TT bike I had all of one training ride on. The weather cleared briefly in the early evening enough for me to get an easy spin in before packing it in for the night. It was great to be staying with fellow Xterra racer LaJuan Kelly and her husband for the weekend who indulged me with a fabulous dinner and great "TV entertainment" ;). 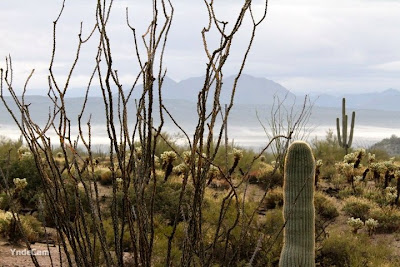 With an 8am start it was early up and out the door. The race is held at the McDowell Mountain Park just outside Fountain Hills and while the weather was still threatening, the rain had stopped and the temperature was cool but not freezing. It was a mini-Xterra reunion with both Mel McQuaid and myself, as well as Trevor Glavin and Cody Waite racing. The womens field was small but stellar with Leanda Cave, Lisa Ribes, Anna Curi Preisig and the Wassner Twins joining Mel and myself on the line. We all enjoy some laughs and jokes before the race as Mel arrived literally 15mins before the start having hit the snooze button as few to many times and preceeded to do a few jumping jacks for warm-up, but it was game on right from the start. 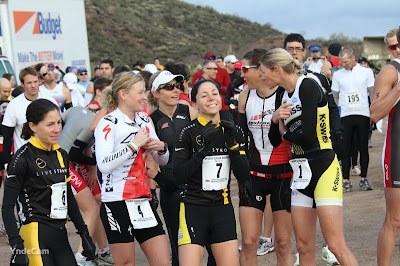 Leanda warning us about the mountain lions ;) 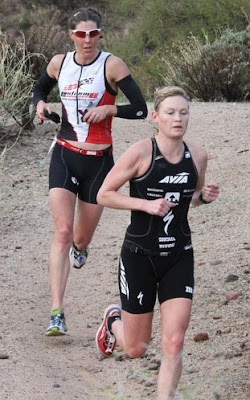 Leanda and Lisa both took off like rockets with the rest of us just trying to hold it close. By halfway through the first run it was Leanda out front and Lisa, Mel, Bec, and myself running all together. Once we hit the single track, Mel and I managed to put some time on the other two and headed out onto the bike together. I would right now love to say that I totally threw down and hammered out the bike, but with riding a borrowed TT bike and having only 2 rides in an aero position under my belt for the past four months I painfully watched Mel simply ride away from me. Everytime I race this course I am surprised at just how hard the bike is and my quads were defnitely letting me know this. Bec caught me a little passed halfway, then unfortunately blew a tire and had to walk it back to transition. I held third through the rest of the bike and headed onto the second run having lost 3mins to Leanda and Mel but gaining a bit of time on the rest of the girls and sort of stuck in no man's land ran strong to the finish. 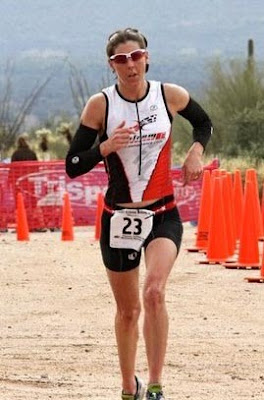 Leanda held off Mel by about 30sec for the win with Lisa and Laurel rounding out the top five. Leanda, Mel and Lisa all look great heading into the Abu Dhabi Triathlon which I wisefully will not be attending. The weather held off just long enough for us to get in a nice group warm down run and get all our gear out of transition before the skies opened up and the rain poured down again. So I have to admit pretty happy with the result and glad to have the first race out of the way as it always hurts the most. Definitely looking forward to adding that swim back where it should be for the rest of the races this year. Also looking forward to a bit of a recovery week and very excited to be getting some quality time in on my own triathlon bike when it get here in a couple of days. Thanks to everyone at the Phoenix Triathlon Club and all the volunteers who put on another terrific race, and thanks to Kerry Yndestad for the race photos. (full race results here) 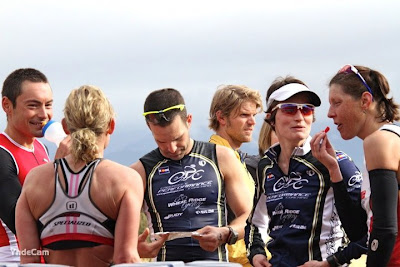 Time is flying by and the race season is getting underway (blogging is still lagging behind). Two weekends ago I headed up to the 2nd MBAA race of the series at Estrella Mountain Regional Park where there is a competitive MTB course built right in behind the Phoenix International Raceway. Thankfully I had pre-ridden the course beforehand as it was a really fun technical course and I knew exactly what I was dropping into, lots of great rocky descents and climbs. Sadly the women's field was really small and very quickly it ended up myself and Kenda Pro-rider Zephanie Blasi. The race was 2 loops of the longer outside loop and 1 of the inside technical loop. We rode together through the first loop, then Zephanie put a gap on me through one of the technical sections and I was chasing hard 30sec down going into the 3rd lap. Unfortunately she flatted mid way through the lap and ended up running her bike in. Overall a great race, taking the win for Team Colleen. 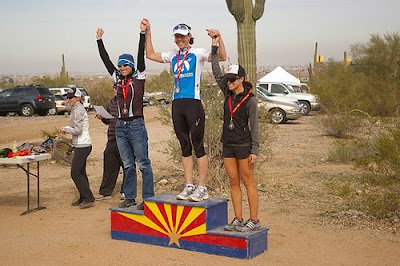 I didn't think that I really dug all that deep for the race, but at 2hr20mins it was one of the longer MTB races I have done and the first race effort of the year and training the next week was miserable. The body gradually got itself sorted out and I got back to some great training sessions this week. Mel McQuaid also rolled into Tucson this week and I have enjoyed getting some pool sessions in with her even though we end up chatting way too much and inevitably missing send-offs. She is focusing on the high stakes Abu Dhabi Triathlon in a couple weeks so I have passed on joining her on her marathon bike rides. Up this weekend is the Desert Classic Duathlon, now in its 14th year. Other than being a duathlon and therefore lacking the most important thing - a swim - this is a great race I raced numerous times years ago while I was living in Tempe. Held out in Fountain Hills at the McDowell Mountain Regional Park, it is a 3.5mile trail run, 21mile bike, 3mile trail run and usually attracts a great group of local triathletes and a solid group of pro's.

I was really hoping to race on my brand new Fuji D-6, but due to some technical sizing difficulties I will have to wait until the next race to show it off. Big thanks to Bruce at Fairwheel for all his time getting me set-up on another bike for the race. I haven't been on a true TT bike in many years and have been only riding my road and MTB for the past two months so I am a little apprehensive about the bike leg and how the body is going to respond to the completely different riding position but overall really looking forward to getting out and hammering and hopefully mixing it up with the "roadie triathletes" :))

Posted by Christine Jeffrey at 7:52 PM No comments: