It's been over two weeks since the Xterra World Championships and I am still pretty excited about the race. Leading into the race all things were pointing towards a great result. I was healthy, injury free, and super fit. After my last hard week of training Gareth emailed me telling me to start expecting a great performance, top 3. I'm not sure I truly believed that was possible, especially with the incredible fire power in the women's race, but improving on my 5th place finish two years ago and being back on the podium was something I really wanted. Being picked by the Xterra TV crew as one of the top 5 pro women to look for definitely gave the confidence another little boost. My first year, 2008, I had no idea what was headed my way and really had no expectations for the race. A year later, with a surprise podium finish under my belt, I remember getting to the start line with a sense of dread and uncertainty about whether I could pull off a good race so it was a pleasant surprise that race morning arrived and I got through setting up transition and warm-up with a strange sense of calm confidence. I never feel great warming up before a big race so I have stopped worrying about it and just do what I need to do trusting once the gun goes off and the adrenaline is pumping everything will fall into place. 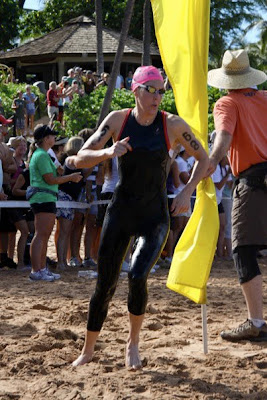 The swim start was much better set up than last year giving everyone more space across the start line, unfortunately it didn't help me and I had one of my roughest starts. It seems either my front end swim speed is lacking or everyone else has upped their game. Heading into the beach for the first lap I was fighting just to stay somewhere in 10th to 15th place and Julie Dibens was swimming right next to me. Not what I had planned. I hustled the beach run and jumped back in for the 2nd lap hoping to feel a bit better. One by one I picked off the guys in front of me until I ended up on Seth's and Craig's feet and headed into T1 in 3rd hoping I had put some serious time on the rest of the womens field.
If Ironman had taken anything out of Julie's legs it certainly wasn't apparent as she came flying by me in about the same spot she had the previous two years!! I didn't feel great but I don't think anyone does heading straight uphill right out of transition. My first panic moment came as I tried to get a drink out of my camelbak and got nothing. With only one bottle of electrolytes on my bike I really needed to get it working. After a bit of a struggle I figured out if I waited to a relatively smooth flat section and pulled it off one shoulder and swung it around to the front I could get a drink out of it, so at the first occasion I put back at least half of it and thankfully the stomach didn't seem to have a problem with it. Wasn't an ideal situation (and I likely looked like a complete amateur), but I would have lost a lot more time blowing up at the end of the bike. 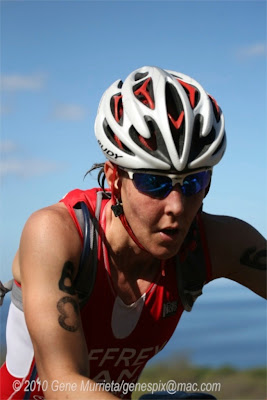 After Julie, Shonny was the next one to go by and was absolutely moving!! I was riding well, staying on my bike for a lot more of the climbs and rocky sections than previous years and taking the downhills with confidence. Mel passed me sometime after Heartbreak Hill (yes I had to walk - maybe next year!!) but wasn't looking sharp and I was able to hang with her. I was down into fourth place but still feeling pretty comfortable with my position until Suzie Snyder came by me. In just her second or third race as a pro she wasn't one of the girls I had expected to be at the front of the race. I remember thinking I hope she is having the race of her life. (She was!!!) With Suzie and Mel riding just in front of me and now in fifth (last podium spot) I admittedly was fighting to stay positive and keep my head in the game wondering who would be the next one to ride by, the downside of being the fastest swimmer. After the plunge, the section past the Oil Tanks is the rockiest part of the course. You don't carry any momemtum and have to fight with every pedal stroke to keep the bike moving. It's also the last mile or two before the downhill into transition and with the end of the bike in sight I was not going to loose another spot before then. 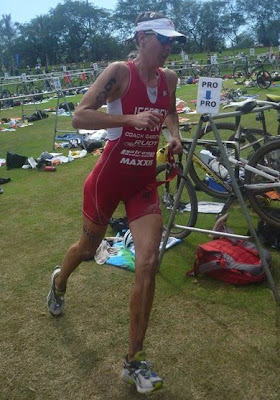 Into transition and quickly into the shoes I headed out onto the run still in 5th listening to Jamie Whitmore, who was helping Xterra call the race, announce I was just 45sec down on Suzie and not much more to Mel. I heard "She could easily run herself into 3rd" and decided that was exactly what I was going to do. I got some added motivation as I headed out the chute and saw the entire fleet-footed crew rolling into transition right behind me. Nothing like having Marion Lorblanchet, Carina Wasle, and Lesley Patterson lined up on your heels to get you moving. Panic moment number two came as I hit the road and got into my run stride only to have both quads and calves cramp. I had gotten in both my bottle and camelbak of electrolytes, all 3 drop water bottles, my gels, and 3 salt tablets and I couldn't believe that wasn't enough. My Atlanta training partner Mark Rudder running right in front of me totally saved the day handing me 2 of his salt tablets which I immediately dry swallowed not sure where exactly the next aid station was and afraid I might drop them. Problem hopefully solved and back to the work at hand - 3rd!! I passed Suzie back as we turned off the road and started up the longest hill in the world (or at least it feels that way) I was hoping I would just run right by her without a fight but she was having the race of her life and decided to hang tough, grrr. I finally gapped her and set my eyes on Mel, who was unfortunately not having the day she was hoping for. Moved into 3rd at the top of Cactus alley wondering how long I could hold off the surely approaching runners. Unless you are leading the race a hovering camera can only mean one thing, you are about to get passed!!! At the bottom of cactus alley before crossing the road onto Big Beach, the dreaded motor bike appeared and it was only a matter of who and how many were right behind me. Marion and I headed out onto the beach just a couple of feet apart. She took the high line in the deep soft sand while I headed straight to the waterline hoping to find some firm sand. I closed down the space between us and was moving ahead when she noticed and joined me. I tried to hang on to her heels but she was just too fast and the elastic band snapped heading into "spooky forest". I was desperate to know if I had anyone else right behind me but was afraid to look back. Scampering across the last section of coral before the finish line someone gratefully let me know there was no one in sight and I got to enjoy the run up to the line, indulging in some high 5's with the cheering kids lining the path. Sure top 3 would have been nice, but 4th was still pretty amazing!! Shonny had the race of the day taking the win less than a minute ahead of Julie, then Marion and myself in 3rd and 4th with Suzie having the surprise race of the day out-sprinting Carina at the line for 5th!!! 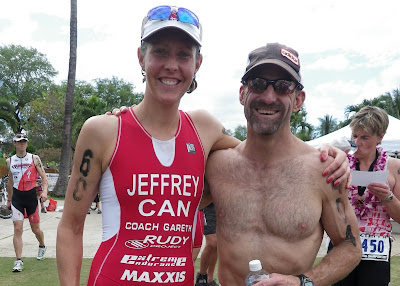 Mark Rudder - thanks for saving the day!!!

As always a big thanks to everyone; coach, family, friends, and sponsors,(Rudy Project, Maxxis, Extreme Endurance, Rocket Science Sports) who help out and make it all possible, I couldn't do it without all of them. It is now time for a break but it will be next season before you know it, CAN'T WAIT!!!! 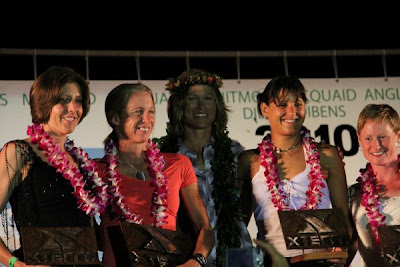 Posted by Christine Jeffrey at 4:55 PM

so fantastic CJ! You are knocking on that door - have some well earned rest and get ready to kick it wide open next year!!