Where or where did my bike legs go....

Been avoiding writing the race report for Miami International Triathlon for over a week now. Not that it was really all that bad a race, just not what I had hoped for. Got up early for the 7:15am race start and luckily brought my camping headlight so I could see what I was doing setting up transition and warming up. As the race was right downtown Miami we were all getting ready to go at about the same time the party crowd was stumbling out of the clubs. Thankfully there was the biggest police presence I have ever seen at a race out keeping most of them off the roads. 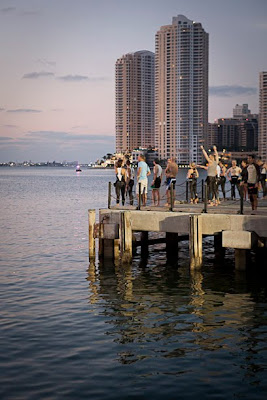 Felt pretty descent warming up and got off to a good start and right onto Sara McLarty's feet. I guess I must have zoned out for a second because right before the first turn buoy I looked up and suddenly there was a gap that I couldn't close down, grrr. I ended up towing three other girls around the swim course and lost about a minute to Sara. Pulled the rookie move and dropped a shoe coming out of T1, hopefully got that out of the way for the rest of the season. Then tried to settle into a strong pace on the bike but had nothing in the legs. I know that I haven't been on my TT bike much but not sure that can total explain my complete lack of power. Struggled just to get through the course as more than half the field rode by me like I was standing still. Legs felt like lead weights, like in those nightmares you have where you need to move and no matter how hard you try you just can't seem to go anywhere. Got into T2 in 9th and thankfully the run legs felt pretty good. Got into a good rhythm and started making time on some of the girls in front of me. Ended up moving up a spot into 8th and having a really solid run split 37.17. 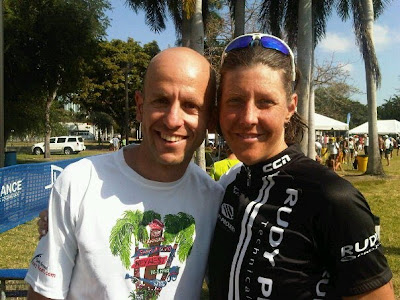 After the race I enjoyed a nice night out in South Beach with my homestay Berk Boge, good food, live music and the biggest mojito I have ever seen. Monday I had a late flight out so got in an easy run/swim before heading out to the airport. I had no trouble getting my bike, disguised in a hockey bag, on with no fee from Phoenix but had to argue a bit with the agent. I think she finally got tired of fighting with me and said "this time she would let it go without a charge" :) After some thinking and talking with Gareth about the race and training in general, we decided that a trip out to LA for a bike fit and blood lactate/VO2 testing on both the bike and run was important. I haven't had any testing done in a while so we have been working off really old numbers.

The 8hr drive out from Tucson on Sunday was super boring but really flew by. I am here in LA for a couple of days, then back to the desert for a nice training block before the next set of races. The craziness starts with the first race of the Lifetime Fitness series, South Beach Nautica Triathlon, then right into Xterra Waco, a weekend off then over to Spain for the ITU Cross World Champs. One week off after that then another block of 3 races back to back!!!

Posted by Christine Jeffrey at 12:21 PM

I've had races like that - so frustrating where I spent the entire bike thinking WHERE THE HECK did my legs go?! Hope the testing goes well!