Back when I was a swimmer I use to enter a "throw-away race" before all my real events at any big competition. This race was always aweful but it woke the nerves up, cleaned out the cobwebs, and got me ready to get on with the important races. I was hoping that the Desert Duathlon would act as that throw-away race but apparently I needed two this season to get the reset button to fully engage. Just a week ago I switched up the schedule and decided to head to Vegas for the opening race of the Xterra USA Pro Series. I made the 7.5hr drive out from Tucson on Thursday with fellow Canuck Karsten Madsen and spent friday/saturday getting in some pre-rides and runs on the Lake Las Vegas course. I was really happy with the small changes to the bike course which took out the stupid hike-a-bike and sketchy downhill and generally made the course much more rideable, though still super tough. I also liked the new single loop run course and well the swim is the swim. (and just for the record it wasn't THAT cold, definitely not in the 50's. Sure the hands and feet got a little numb and the face was a little tingly, but no gasping for breath, thinking about ripping off my wetsuit feeling that 50deg water entails) 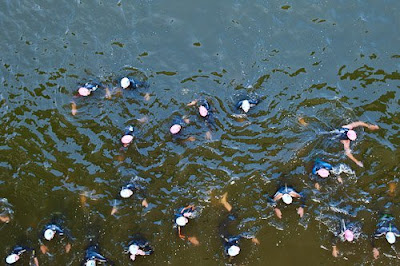 Got up early Sunday morning and did the usual warm-up routine feeling pretty good, not super snappy, but it's still April. The swim was a deep water start under the bridge of the Aston Montalego Hotel, but with only 30 or so pros and plenty of room it was pretty mellow. I was only swimming in my new Nineteen wetsuit for the 2nd time this season but felt super comfy in it and jumped right on leader Seth Wealing's feet. Seth was setting a quick enough pace that I couldn't get around him and go faster, but was a little too easy sitting in his draft. In the end it made more sense to conserve the energy, though I did try to will him to pick it up just a bit (didn't work) and hopefully didn't irritate him too much running into the back of his feet constantly, I hate doing that to people. 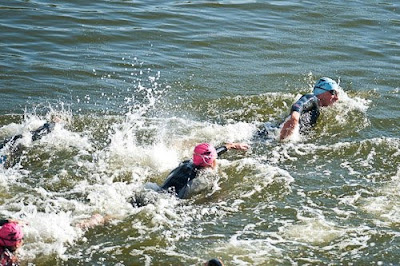 Seth and I heading to the first buoy

Was out of the water in second overall, first woman and as usual had no idea where anyone else would be. Even with the numb hands and feet I had a speedy transition and headed out onto the bike, the first race on the new (and super fast) Fuji DSR 1.0. The 2 loop bike course, while not overly technical, had a bunch of tough uphills early on with some deep sand wash riding in the middle and a tiny bit of single track at the end. I held off Mel quite a bit further than previous years and felt I was riding strong and steady, though not as quick as I would have liked. Couldn't hang on Mel's wheel but entered the second lap still holding onto 2nd place. Half way through the 2nd lap I was caught by Xterra rookie, Pro MTBer and fellow Honey Stinger athlete Kelley Cullen, with Shonny not too far behind her. Great to see new faces out racing - not as happy when they go whizzing by me. I held it close finishing up the bike and flew through T2 to close the gap down to as little as possible heading out on the run.

Had to put the following photo in to call Shonny out ;) racking her bike nowhere near her spot and right on top of mine!!! How many bikes can you squeeze onto one bike rack... 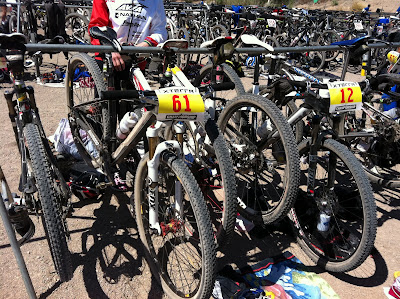 I could see Shonny and Kelley running side by side about 200m in front of me and called on the legs to pick it up and shut it down. They didn't respond. I caught Kelley about 3km in but the gap between Shonny and I would close a bit, then open back up, repeat, repeat. On the uphills it would seem like she was right there but the illusion would right itself on every downhill and she ran a strong second 5km to finish just over a minute up. Mel never had to look back after passing me to take a convincing win, while Kelley Cullen and Danelle Kabush rounded out the top 5. 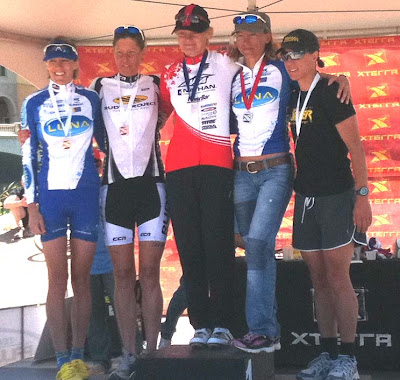 Overall really happy with the effort and result (3rd) but looking at the splits it is still obvious that the bike needs to improve. I'm back in Tucson for a quick 3 day turn around before heading to Waco Texas for the next race. It was great to see everyone in the Xterra crew again and super big thanks to Shelby for the bike feed, all the great volunteers for their help and race sponsors for putting on a great race. Also huge thanks to my sponsors Fuji, Rudy Project, Maxxis, Nineteen, Extreme Endurance, Champsys, and Honeystinger for all their great support!! Coach... we are back on the right track and moving forward.

Check out the Race Gallery from Nils Nilsen for some more great shots!!!

Posted by Christine Jeffrey at 8:53 PM