Been a bit negligent in the blogging department so will try to update likely in a couple installments.

The Boulder Peak 5150 Triathlon and Xterra Mountain Championships in Beavercreek were the last two races to wrap up the first half of the season.  Having enough of packing up bikes and lugging them through airports I decided to make a road trip to Colorado.  Heading out Wednesday before the Peak race all loaded full of Trader Joe's goodies I made the two day drive up to Boulder with a quick overnight stay in Albuquerque.  Quite the boring drive, I vowed to take the scenic long way home. 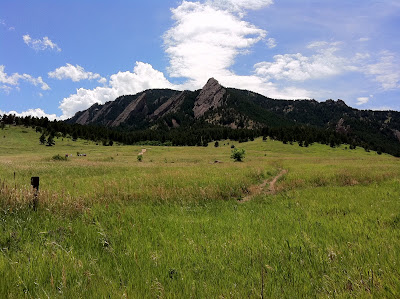 I had never been to Boulder and was pretty excited to see what all the buzz was about this triathlon mecca and also pretty excited to be staying with Xterra friends Will and Shelby.  The flatirons are definitely pretty spectacular and I can see why so many triathletes gravitate there.  After a good nights sleep in the cooler Colorado temperatures I headed over to the famous Flatirons Athletic Club for a quick swim Thursday morning before checking out the bike course with Will and Guilherme.  I had been told about Old Stage hill but I guess never really paid much attention or asked any questions and was a bit surprise to learn it was about 18% in some sections.  I thankfully had a 25 cassette instead of a 23 on my bike and didn't have to go scurrying around trying to swap it out the day before the race.  Really I would have been happier on a 27 but decided to just make due with what I had. 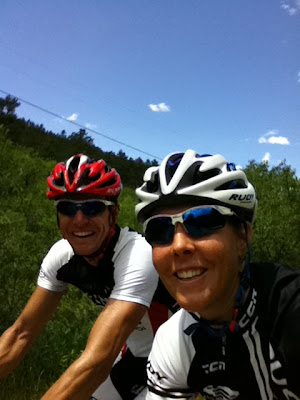 Saturday was the usual pre-race stuff, light workouts, pro-meeting....  I was feeling pretty good considering the altitude and was pretty relaxed and excited about race day. 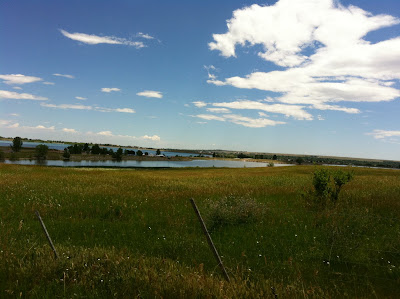 ﻿The pro's once again had a separate wave start after the amateurs so it was a nice leisurely 9am start time.  Boulder reservoir was hopping with excitement by the time I got there and Barry Siff was on the mic doing his thing!!!  The pro race was a chase format with the women getting about a 15min head start and everyone racing to the finish with a bonus for the first overall across the line.  I wasn't really concerned about that as realistically I was looking simply for a good enough finish to get me in the top 20 in the 5150 series to get my invite to the Hy-Vee race, being in the money would just be bonus but the field was super strong and full of altitude dwellers.
Gun went off and I knew I was in trouble right from the start.  Being a swimmer for most of my life I am usually as comfortable in the water as on land, but I had a moment about 100m into the race where I wondered whether I might actually drowned.  Not sure if it was altitude related but I felt almost paralyzed without the strength to stay above the water never mind swim.  I think I did a few breaststrokes and moved myself away from any failing arms into clear water to try and regroup.  I took me until the halfway turnaround before being able to settle into a decent pace and get my head back in the race.  Lost a bit of time to the leaders and finally got out of the water in about 6th, 20secs or so behind the leaders.  I have never been so happy to get out of swim leg in my life.
Started the bike pretty conservatively riding right with Kristen Peterson. Since Old Stage was very early on in the bike, I figured I would get up and over it just riding my pace then see what the legs and lungs could do from there.  Lost touch with Kristen and a flying Nik Butterfield over the top and rode the rest of the bike solo in 8th, feeling pretty good but really not knowing how close the rest of the field was behind me.  Got into T2 just being caught by a group of 4 and headed out onto the run with fellow Arizonan Angie Axmann.  Previewing the run it looked to be a relatively flat 3 loop out and back.  Reality strangely turned out to be much different.  I think the altitude, lack of training due to over-racing and a nagging Achilles niggle had finally caught up with me and I really struggled to hold the rather pedestrian pace I was running at until the end.  Finished up in 9th and hoped that it would earn me the points I needed for a top 20. 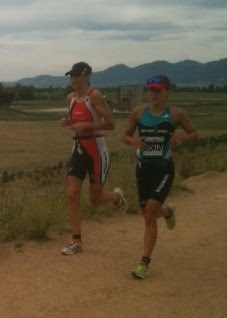 After a quick post-race ice bath in the flood level Boulder Creek I sat down and re-added up the points and found myself sitting in the rather depressing 21st spot in the 5150 series.  With only the top 20 making the first cut and another 5 being added after the New York Tri, it looked like I was going to have to just sit and wait and hope that less than 5 people passed me at the last race.  There was no way I was going to add another race into my schedule, I could barely walk the Monday morning after the race and was seriously considering making the Xterra Beavercreek an aqua-bike.  I was already up in Colorado or I would have skipped the race altogether.  To jump ahead a little in the timeline, it turned out that someone in front of me passed on their spot and I got my invite without having to worry about the NYC Tri.
Packed-up my stuff after a quick spin Monday morning and headed down to Colorado Springs for the day to drop off my bike at SRM (stupid power meter) and spend the evening with Tracy Thelen and hubby before headed UPPPP to Beaver creek.......
Posted by Christine Jeffrey at 6:11 PM