Finally put together a really great Xterra race this season with a 5th place at USA Nationals. (up from 9th last year) The altitude really made it tough but I felt strong the whole way, even had the 3rd fastest run behind uber runners Leslie Patterson and Carina Wasle (both likely well under 100lbs) Struggled through the swim a bit, really feeling the lack of swim training after the shoulder injury 3 weeks ago and getting totally dunked and swum over at the start. I ended up leading the 2nd pack out of the water. Got into a good groove on the bike and other than Mel who had a great swim and was flying, held off the other girls much further than previous years. Leslie and Shonny caught me just at halfway through the bike, Sarah and Jenny about three quarters of the way, and Renata and I rode into transition together. Renata surged once we hit the single track and I couldn't hang on and had to let her go. Then just passed halfway I reeled her back in and passed her with Sara visible just ahead. I passed Sara with about 2miles to go and had Jenny in my sights. With the last mile straight downhill I knew that I had to catch her by the top of the last climb and she was running scared knowing I was right behind her. She got over the top a bit in front of me and held me off to the end. No matter, great race. Now its off to pack up the bike and hed over to the post race party!!!! 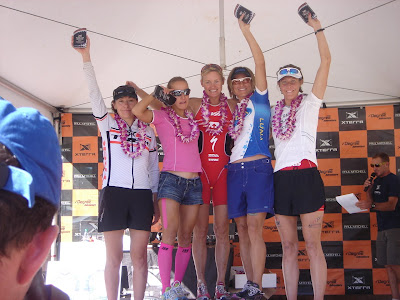 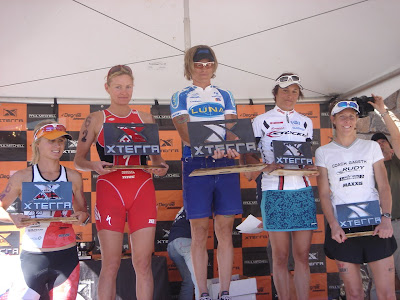 Posted by Christine Jeffrey at 5:11 PM No comments:

So instead of trying to write a whole bunch I have decided to post pictures with some brief comments in between. After the Muskoka Triathlon way back in July I had a nice three week block of training before heading down to Windsor to do the sprint triathlon there. One of only a couple races in Ontario with prize money it is a favourite among the local elite racers. The coach wasn't nearly as impressed so I went into the race pretty worked over but still looking for the win. James Loaring's sister Char graciously offered up the family home in Windsor for a whole group of us to stay at and even hosted the post-race get together. Race morning turned out to be one of the hottest and most humid days of the summer. The swim was 1km in Lake St Clair and wasn't even waist deep the majority of the way. The elite wave decided on our own rule to swim, not dolphin dive, the swim, though Sean Bechtel did take a few extra off the start to get out ahead of the field. The 30km bike was flat and fast and even the wind at 35+km/hr didn't evaporate the sweat that was pouring off of me. I headed out onto the run feeling like I was going to either pass out or throw up (or both) and struggled just to finish. It was definitely the longest 6km run of my life (likely also the slowest). The post race party was a blast and I added another win and some money to the bank account. Not a bad weekend. 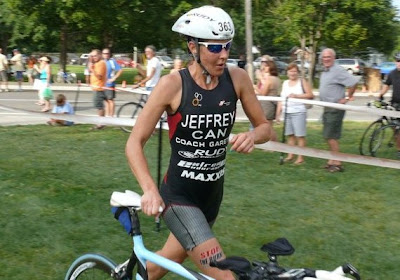 Into T2 at the Windsor Triathlon 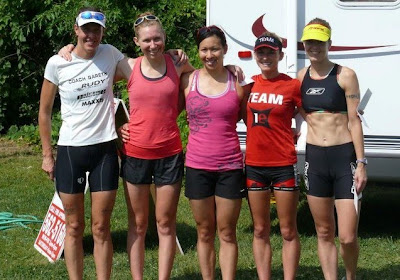 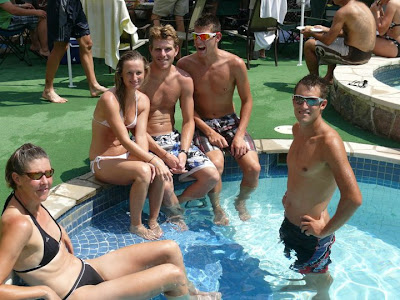 Post-race Fun
The very next weekend I was excited to race again at the first off-road triathlon held in Ontario in a very long time. Put on by James Kowalewski at http://www.elementracing.ca/, the 'Mine' over Matter Triathlon was held at the Kelso Conservationa Area just outside Toronto. Unlike the weekend before, a cold front moved in late Saturday afternoon and preceeded to dump serious amounts of rain throughout the evening. The rain stopped just as I pulled into the venue and thankfully stayed away for the race but the trails were super slick and most of us were pretty thankful the race stayed away from the technical stuff and I definitely rode conservatively, though I still managed to slide of the trail and into the bushes the second time down the escarpment. I led Karsten Madsen and the rest of the field out of the swim and through the first lap of the bike, getting passed by Karsten and two other guys on the second lap. I headed out onto the run fourth overall and first women and held that position to the end. Despite the weather James put on a great race and sounds as though he is working on expanding to a couple of races next year, even reviving the Guelph Lake off-road Tri, very exciting. 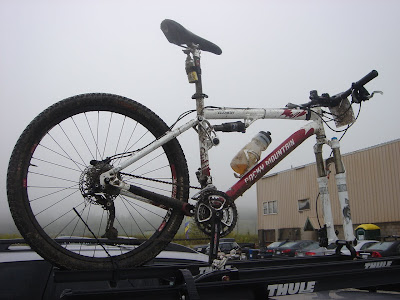 My Dirty bike after the 'Mine over Matter' Tri
A quick two weeks later it was off to Whistler BC, for Xterra Canada. What a great venue and great race organized by Cal Zaryski and Yoeri Geerits. I just finished writing the race report for the website so here is the link if you want to hear about all the details, crazy weather, super technical trails, a dislocated shoulder.... (seeing as this post has seemed have expanded past a couple of comments between photos) www.christinejeffrey.com/10xterraca 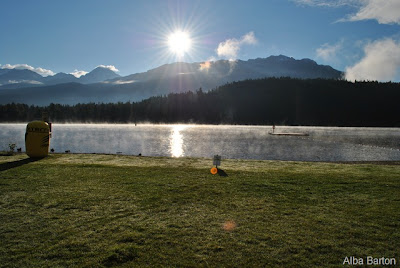 Sunrise at Rainbow Park before the swim start 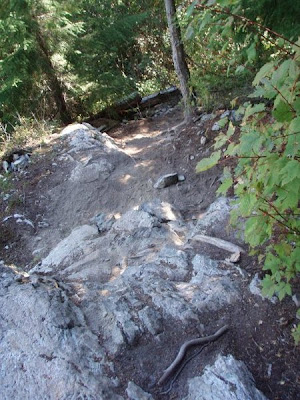 One of the scary descents I decided to walk 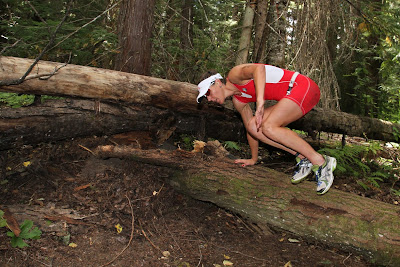 More photos of the races at www.christinejeffrey.com/2010XterraWhistler

I am now in Utah, another spectacular racing venue, just two days away from the Xterra USA Nationals. Not really my style of course, point to point uphill course at altitude, but I have been here almost a week and was sleeping in my altitude tent prior to getting here and a little surprisingly have been feeling pretty good. Had a great spin around the upper loop of the bike course and I am really looking forward to the race on Saturday!!

Posted by Christine Jeffrey at 6:48 PM No comments: