Got home from DC and after a couple of recovery training days it was time to hit some good quality workouts again. I was feeling a little unmotivated and happen to notice that the Arizona State mountain bike championship race originally scheduled for Williams (5hr+ drive)had been moved due to extreme fire danger to the McDowell Mountain Competitive Track just outside Phoenix (2hr+ drive. Though I really didn't need to add any more racing to my schedule it seem like a good substitute for a hard ride and with a little moving around it fit pretty well into my training plan.

I drove up Friday afternoon with enough time to enjoy a quick pre-ride of the course. Built specifically for MTB racing, and once host to the Cactus Cup, the track is screaming fast and super flowy. They decided to run the race in reverse to change it up a bit from the first race of the series so unfortunately we had to ride up the half-pipe which wasn't anywhere near as much fun, but it was still great riding. Got to hang out with Phoenix pro-triathlete Katie at Casa Ellis for a bit and catch up with some good local gossip, always lots of fun, then headed to bed dreading the 3:30am alarm.

As bad as it was having to get up that early, moving the start time to 5:30am meant we were able to race without fear of dying out on the course somewhere. Bit disappointed to only have 7 gals line up for the Pro/Cat 1 wave start but managed to put in a good effort nonetheless until the last short lap when the legs decided to start the warm down a little early. All in all great fun, certainly better than intervals on the trainer. Big thanks to MBAA, HUB Events, and all the volunteers and sponsors for relocating and putting on a great race with 3 days notice of a venue change:)

If you have never ridden in the desert, here is a great video clip from the race!! (beware it does seem to take forever to load)

Posted by Christine Jeffrey at 4:51 PM No comments:

The Washington DC 5150 race was my second race in the new 5150 series to try and get an invitation to the Hy-Vee Triathlon in September. It was also only my second road tri of the season after 6 Xterra/Off-road tri's in a row. I was nursing a little bit of a sore achilles and calf after the Xterra Richmond race the weekend before but after a really light training week it along with the rest of the body was feeling okay to race. After a couple of days in Fredericksburg Branden and I headed up to Alexandria where his cousin Megan let us once again move in and make ourselves at home and Sue Anne headed down on Saturday to join us in our roadie tri adventure. We had the grand idea of heading down to the race course on Saturday to pre-drive the bike but quickly realized that DC traffic just wasn't going to make that possible. We settled for picking up our race packets, checking out the expo and attending the race meeting. The women's field didn't have a clear standout but was looking to be incredibly strong and close to about 20 deep. After the meeting we headed down to transition to get SA's bike checked-in. It was pretty funny to see the swim course all marked with the biggest buoys I have ever seen every 100m and labelled!!! I'm guessing with the pro field being led off course at the REV 3 race they weren't going to take any chances ;) 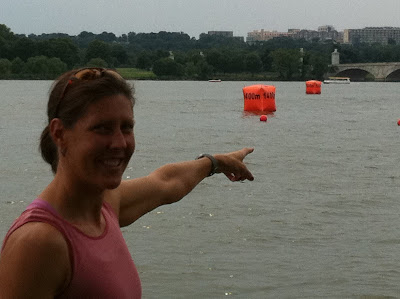 Race morning was an early one for SA, 6am, as the amateurs were towing the line first. The pro's had a much more leisurely 9am start and thankfully the weather looked to be nicely overcast but dry. Setting up transition and warm up went pretty smoothly despite the close to 1500 age group athletes racing all around us, though had to play a little bit of frogger to get my bike into transition. Headed down to the swim start with plenty of time to get the blood flowing up into my arms to find out that they weren't going to allow us into the water before the start, not terribly happy about that one but everyone was in the same boat. Got off to a good start right in behind Sara but again couldn't quite hold onto her feet and settled for leading the second group out of 7 out of the water. The bike course was truly pretty amazing. That they shut down the main streets through DC was really special and with the age groupers already done we had it all to ourselves. Starting from the Potomac Park we rode past the Washington monument, up and down Constitution Blvd then out for a couple loops along and over the river. I settled into my pace well but just couldn't stay with the top girls. The legs were carrying just a little too much fatigue from all the racing so far this season to crank out any more power. I was happy that unlike Miami I was much more comfortable in the aero position and manage to find a good steady rhythm for the entire 40km. Now it just needs to get a little bit faster!! Out onto the second loop Amanda Felder caught me and we rode together into T2 in 12th and 13th.

The run started off okay but with the majority of my training being off-road the pavement quickly took its toll on my fragile achilles and calves. I managed to pick up a spot passing Pip but then lost it and ended back up in 13th. 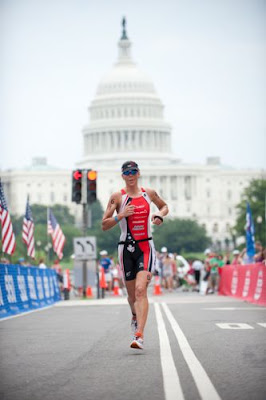 I got to the finish with no one in sight behind me so got to enjoy a bit of the stunning finishing chut. Big thanks to Kris Mendoza and Triathlete Magazine for the great finish line shot. You can check out the entire photo gallery here!!

Was pretty done after the race but couldn't pass up the opportunity to check out the monuments all lit up so we headed downtown and took in a few of the most popular. Megan did have a good laugh at how the two pro triathletes were barely managing to hobble around. My favourite ended up being the World War II Memorial, the photos below really don't do them justice. 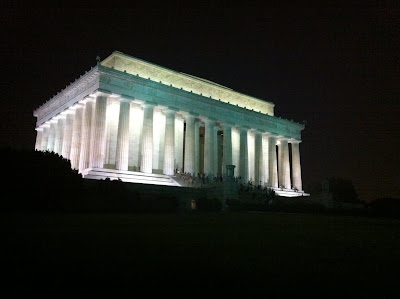 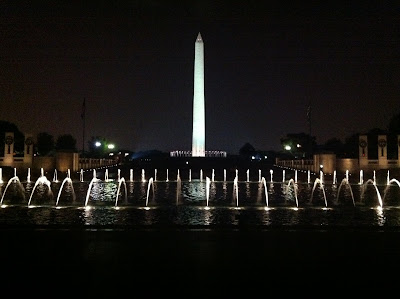 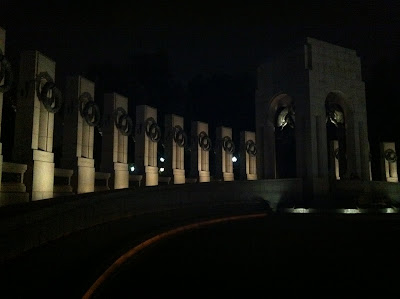 races that is, just because I haven't done enough back to back racing already this year!! After Alabama I had what I thought would be a nice three weeks before the next race. Enough time to recover and still get a nice chunk of training in before racing again. It seems the body had a different idea. It took about a week before I could even think about putting in some training efforts then after only a couple of good sessions the legs blew up and all that was left to do was rest into Xterra Richmond. I did manage to finally get unpacked and settled into my new Tucson home which was very nice!! 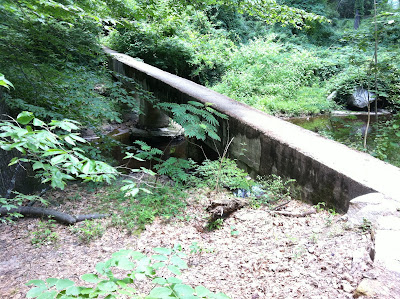 The first year I raced Xterra in 2008 I came to Richmond and barely made it through the bike course, reduced to almost tears by the end and black and blue from hitting the dirt so often. It is truly a unique course on the circuit and is the only race held literally in a urban downtown setting. The swim in the James River constitutes more of a "wet scramble" and usually involves me beaching myself on the shallow rocks at some point during the return crossing. The bike leg twists and turns along mostly singletrack right on the riverbank, through drainage tunnels, over bridges, ramps, and skinnies. The run is a mix of roads, flood water walls, railroad ties climbs (the Mayan Wall), stairs and another scamper across the river. Needless to say with the short sort of swim and longer technical bike Richmond will likely never be "my race" however with a certain amount of changes made by IMBA to the course in the past couple of years and my improved bike handling skills I felt this year I might actually be able to "race it" instead of just "survive it". 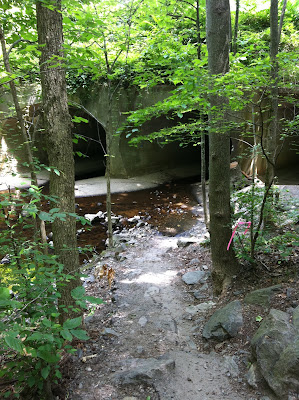 Got into Richmond Thursday evening after some serious travel snafu's (don't ever fly through O'Hare if at all possible) without my bike. Had a wonderful homestay with fellow racers Katie and SueAnne at Meg and Claude's and thankfully got my luggage back safely the following morning. Katie and I headed out Friday to get in a lap of the bike course and check out the swim while trying not to spend too much time in the +90% humidity, +90 degree temperature weather. Earlier in the week it was announced that the bike course was going to be lengthened by more than 5miles (of singletrack!!) to a 2 lap course. This sparked a great deal of debate over course safety and congestion as well as what the appropriate corresponding swim distance should be. We didn't know exactly what or if the swim course was going to be lengthened but at least we had a good idea of how to get across the river fairly efficiently. After that it was pretty much inside, feet up until race day. 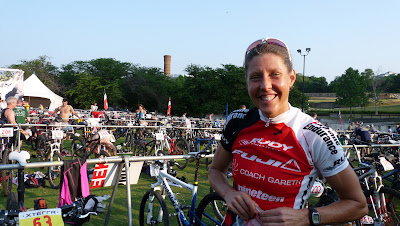 Race morning was thankfully cooler than the previous days but still shaping up to be rather warm. Got in my usual warm-up and headed over to the swim early to check out the course buoys as Xterra had added an extra turn in to make the course a bit longer. I was excited to be testing out the new Nineteen WTC legal swim skin (in hot pink!!!) and needed every extra second lead I could manage with such a short swim. The swim got off to a pretty clean start and I managed to navigate the river without running aground on any rocks, exiting just behind the lead group of men. 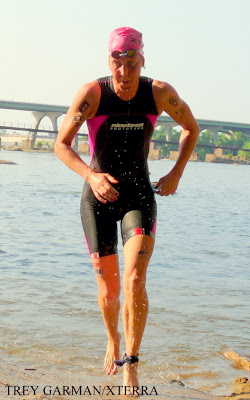 Out onto the bike I could see Mel and Suzie no more than a minute or so behind me. Into the first section of singletrack and not sure exactly what happen but along one of the easiest parts I found myself flying off the trail and right over the bars into the forest, whoops. Really scared the two spectators that happened to have front row seats for the spectacle but thankfully didn't seem to have done much structural damage. It did however shake me up quite a bit and from then on I just couldn't seem to find a good rhythm for the entire rest of the bike. 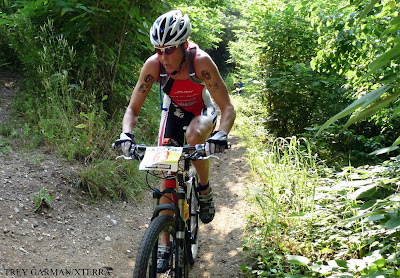 Got into T2 in 4th pretty much in no man's land and was thankful to be trying out the new Bex Runner. I didn't have much left in the tank and was happy to have all the help I could get staying cool. The run amounted to another put one foot in front of the other affair (seem to be having way too many of these lately) and held onto 4th. Happy to finish back on the podium and hold onto 3rd in the series, but painfully aware that the body is simply not recovering between all the races and progressively getting more and more beaten up. I knew when planning out my season that the first half was going to be ugly but had hoped to get through it just a bit sharper. 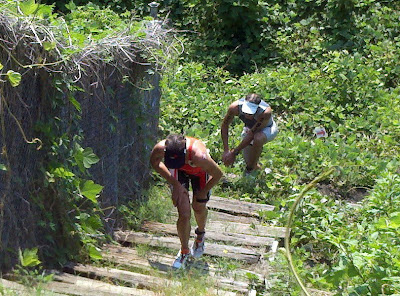 After a couple of days resting in Richmond it was on to Fredericksburg where Branden and I are lucky to be able to "squat" at fellow Xterra chick Suzie Snyder's place before this weekend's race in Washington DC. It will be my 2nd race in the 5150 series and hopefully move me back up in the standings towards qualifying for the Hy-Vee big money race in September. Started the countdown.... only 3 more races before a much needed meet season break:) 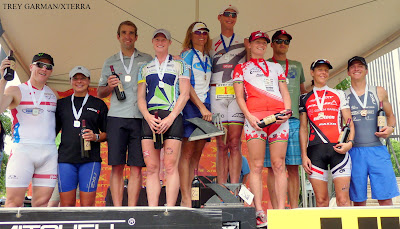 Posted by Christine Jeffrey at 7:00 AM 2 comments: