Wow, look at all this blogging :))) Arrived in Park City Utah last Monday to get in two weeks up at altitude ahead of the Xterra USA Championships over at Snowbasin Resort. The weather has been fabulous except the one day that Mel and I headed over to pre-ride the course and froze, figures. But it is shaping up to be an amazing weekend of racing, just two days away now.

There has also been a ton of media buzz here for the race, largely due to the fact that one Lance Armstrong is showing up.  As such I have been lucky to have gotten some good media attention including a couple of videos, one of which was a short segment on the KSL News 5 Morning show here in Utah, and a nice mention in Sports Illustrated.  I couIdn't figure out how to embed the videos and article in my blog so I have just listed the links below along with some beautiful pics I took pre-riding the new section of the bike course yesterday!!! and my new bike;))

Posted by Christine Jeffrey at 12:14 PM No comments:

Wasn't inspired enough to write a race report for the Xterra Beavercreek race but here are some pics from the experience and much more fun drive home.


The next photo is where the bike course topped out at about 9,500ft.  It is also about where my head exploded.  My legs had given out about 1000ft lower down. 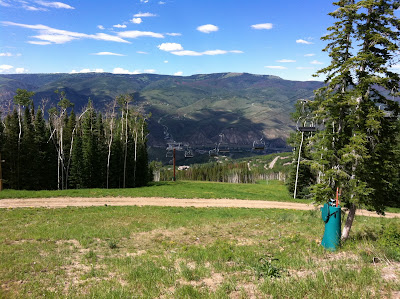 There are no pictures of me running because I wasn't actually running.  More like short spells of shuffling between longer spells of walking which is better than the "sitting down with my head between my knees to keep from passing out" that I really wanted to do.

The day after the race I got talked into joining Brian and Jenny Smith for a "spin" on the Leadville 100 course Jenny was going to race a couple of weeks later.  Jenny wanted to do the section from Twin Lakes up to the top of Columbine (at 12,500ft).  Famous last words "it's a fire road climb, big chain ring"  (my A$$)  the last section I was in my smallest gear, chin on my stem just trying to keep my front wheel on the ground.  I though about getting off and walking but from the other riders out there I was passing it looked just as hard or harder to walk.   Admittedly the view from the top was spectacular.  My legs however did take about 5 days to recover!!! 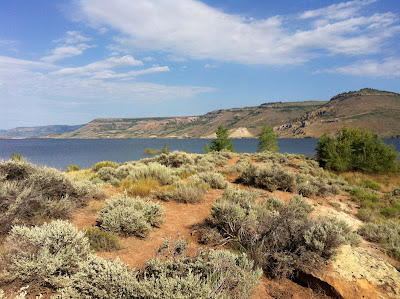 Enjoyed a nice open water swim with the Smith's just outside Gunnison the next day before the long drive back to Tucson.

Decided to take the scenic drive home.  Ouray is one of the coolest towns ever and has a great chocolate and coffee shop, bonus.  US 550 or the Million Dollar Highway from Ouray to Silverton was truly a spectacular treat and made the next 10+ hrs of NOTHING worthwhile.
Posted by Christine Jeffrey at 7:13 PM No comments:

Hanging out here in beautiful Park City getting used to the altitude ahead of the Xterra USA Nationals next weekend and finally have some time to put together my race report for the HyVee Triathlon a couple of weekends ago.  I skipped over Xterra Beavercreek as there was really nothing to say about it.  I made it through the race but that was about it.  I did have a great ride the day after on the Leadville course with Brian and Jenny Smith, and a scenic drive home so will posts some pictures of that in the next post.

After Beavercreek the body was done, like really really done.  I stopped in Durango for lunch on the drive home and had to use my arms to swing my legs around and host myself up out of the car.  Then I barely was able to hobble into Subway to grab a sandwich.  A week off was absolutely necessary.  Not really ideal for the timing of HyVee but there wasn't any other way.  On top of that my achilles decided it didn't like me either and forced me into four weeks on the elliptical trainer leaving me only two light weeks of running heading into the biggest money race of my life, oh well.

So arriving in Des Moines I had no idea how my race was going to go and really didn't have any expectations.  I was also looking at one of the best pro fields assembled outside a world championship event.  Admittedly a guaranteed paycheck for simply finishing the race was a bonus and as it turned out quite a few of the girls were there suffering through illness and injury for just that reason.  HyVee and 5150 certainly did not disappoint in putting together a great event, from being met at the airport and instantly shuttled to the host hotel, to the best swag bag ever.  The venue was well set up and organized and the great PR translated into a phenomenal amount of spectators and a great atmosphere on race day. 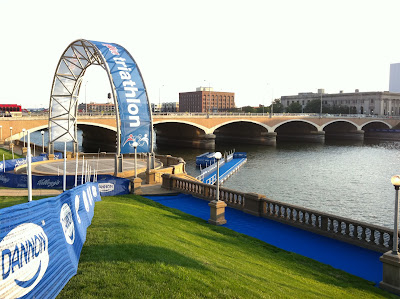 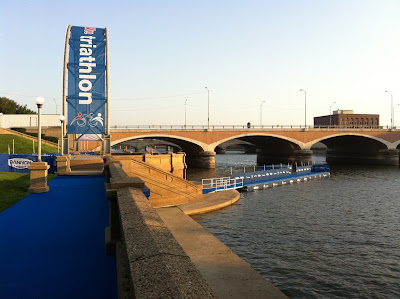 I ended up rooming with fellow Arizonan Angi Axmann who was probably the best thing to happen to my weekend.  With my motivation and enthusiasm being a little on the low side her's certainly made up for it!! (if you know or have ever met Angi you know exactly what I am talking about :)   I also got to hang out with Xterra chick SueAnne for some extra laughs and good times.  The days before the race were pretty relaxed,  getting in a bit of training and taking lots of naps.  (isn't that what race week is for?)

At the pre-race meeting on Friday the organizers told us that the river was a little low and shallow for their liking and had asked the army corps of engineers to add about 8" of water to the section of river we were going to be swimming in (the age groupers were swimming at a lake a little ways away)  True to Murphy's law it rained most of Saturday adding a bunch more water to the river system and by Sunday morning what was once a calm, virtually current free body of water was a swiftly moving river.   Having raced the Tiszaujvaros World Cup several years ago I knew how much fun we were in for (sarcasm)  The swim was supposed to be a two loop affair but after watching the first girls to jump in for warm-up go absolutely nowhere it got changed to a three loop swim with the majority of it looping in behind the pontoon where we were protected a bit from the current.  What this meant was the first turn buoy was less than 100m from the pontoon.  30 elite triathletes in a single line headed towards a single point less than 100m away with a strong cross-current was going to get ugly.

Wearing number 19 I was decidedly right (downstream) of center on the pontoon for the start and knew I was going to get hammered.  A little out of practice with the full-contact swim starts of ITU races I was beaten up and ended up behind the lead group through the first lap and looking to make up time on the next two, but definitely ahead of the non-swimmers who were having a seriously tough time even getting through the swim.  It was officially one of the craziest swims I have ever done.  On the second lap I somehow wasn't paying attention and ran smack into the concrete bridge pillars, first time that has happened.  The tough swim did mean that we were nicely spread out going out on the bike and drafting on the 4 loop bike course was pretty much a non-issue (at least for me).  I got out of the swim just inside the top 10 and settled into the bike.

The bike like the swim (and later the run) was multi-laps, as Sara McLarty said before the race this was going to be a non-drafting ITU race.  With four laps and 17 corners per lap and a good breeze blowing it was a challenging but fun bike course.  Being used to MTB where you rarely get settled into a single pace I felt pretty comfortable with the course and was riding well.  I definitely lost a couple of spots to the stronger riders but was super happy to roll into T2 in 17th spot.  Before the race I had been thinking that against this quality of field a top 25 was realistic and anywhere from 20-25 was having a great day, now the goal was definitely inside the top 20.

I got passed pretty quickly by superstar runners Gwen Jorgensen and Radka Vodickova and was feeling just a little bit un-snappy (hmm, yep only 2 weeks of run training) but while I couldn't seem to turn my legs over any faster I also as the 4 laps ticked by was not slowing down at all and started reeling in the girls in front of me.  I moved up a spot on the last lap and was just shy of running down the next two girls to finish up in 18th.
Overall a great race and experience to be apart of.  While I was a little overwhelmed by all the racing in the front half of the season chasing the invite to this race it all seemed pretty worthwhile in the end.  Next year though I would love to come into this race with a bit more focus and see what I can do.  Will worry about that next year.  For now it is back to the dirt for Xterra USA and Xterra Worlds :))) and yes Lance is racing... bring on the circus ;)
Posted by Christine Jeffrey at 5:48 PM No comments: