Getting Back Into Shape

Hurts a lot!!! That seems to be the common thread going around the social networks these days and I have to agree. Sat down with Gareth and have planned out the year, in detail up until the end of April. With ITU hosting the first ever Cross World Championships April 30th in Spain, we needed to get a bit more focused this December than years past. Week one is in the books and the evil SRM has not been friendly. My run and swim feel pretty good, but the bike legs have vanished like the good weather. Definitely need some new music on the mp3 player to get through the next couple of weeks. 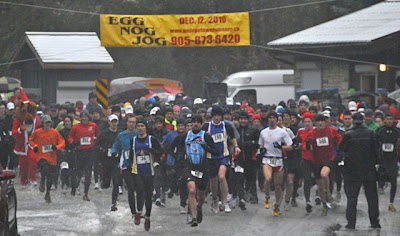 Took a page out of the 'Mel McQuaid's book of offseason racing' and entered the Egg Nog Jog 10.8km race at the Terracotta Conservation Area on Sunday, dubbed the hardest 10km road race in Ontario. True to Mel's rules I headed out to my Birthday Party, oops I mean Tom's Birthday/Christmas Party:), and had way too much to eat and a couple of glasses of wine the night before. Sunday morning arrived with a severe weather watch for most of the Great Lakes area. Unfortunately the temperature was sitting just above freezing so instead of nice snow flurries and a hard packed running surface it was raining and a mix of slushy, icing roads. Got warmed up the best I could and headed to the start line already pretty much soaked. Tried to keep things under control for the first bit of the race but still went through the first mile in about 5:30 and really hoped that is was because it was straight downhill and not that I was going to suffer for the remainder of the race. The rest of the race pretty much felt all uphill which is really fun on ice!! Except for the calves protesting a bit at the end, I felt really great and took the win and 10th place overall. Thanks to everyone at Georgetown Runners and all the volunteers for putting on a great race for the sell out crowd of 600 crazy people who thought it would be fun to race in the middle of a storm.

Woke up Monday feeling like, surprise, I had just raced on no training. The legs definitely letting me know that they were not happy. So just for fun I decided to sign up for the Boxing Day 10miler in Hamilton. Hey, why not, especially since you get these really cool mittens in the race packet!! One has to look for any kind of motivation this time of year. Otherwise it is back to base training. I have jumped in with the RTC group here in Guelph for my swimming and am really enjoying the company. I have been told a couple of them keep some pretty interesting blogs, http://www.iandonald.blogspot.com/ and http://www.dominikajamnicky.blogspot.com/. Perhaps a couple future top Canadian triathletes. Of course Ian will have to work on that bi-lateral breathing and stop inflicting penalty kick 50's on the group before then!!! Next up, weekend Ironman viewing/Christmas Party at James' and Tom will be doing the frozen beer mile, awesome !!!!! Later :)