So for the past three weeks I have been trying to think of a way to positively wrap up this season, sugar coat it so to speak.  Well, I can't do it.  This year SUCKED!! At least as far as triathlon went.  In the greater scheme of live and the world is wasn't so bad.  I have a great life with lots of opportunities, great friends and family, and in the end I will heal and recover and live to fight another day.  But as this is for the most part a blog about the triathlon side of my life, I will return to the summation that the only thing good about my 2012 triathlon season is that it is finally over, done, finished!! I can wipe the slate clean and be done with it.

Video streaming by Ustream
This short promo video done a couple of days before Xterra Worlds sums it up pretty well.  Please excuse the first 30secs.  They told me they weren't recording yet and I was joking around doing all the things I shouldn't do during the video :0 If you can lip read there are a good couple f-bombs in there!! 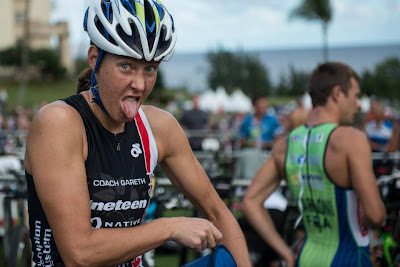 I think Nils pretty much summed up how the day was going to go in this photo!!!


Needless to say my calf didn't hold up for the race a few days later.  I hadn't tested it at all in the five weeks since injuring it at Xterra USA and was hoping for a race day miracle.  I taped it up best I could and headed down to the start.  To add to the injustice of it all, the swim was finally challenging and was looking pretty epic as we headed into the surf.  Unfortunately my calf was so bad I could barely run on the sand and had to limp into the water pretty much getting pummeled and stuck behind the entire pro field.  The midway beach run and run up to transition after the swim were about as ugly as it could get without me actually starting to walk. 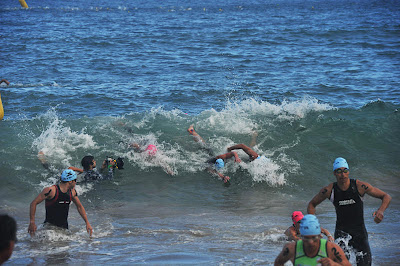 I got on my bike with the two leaders, Mari Rabie and Barbara Rivera, and tried to get my head in gear.  I knew at this point that there was no way that I could run, but I could have a great bike and since I didn't race Worlds in 2011 this was my chance to get a race pace effort on the course if for nothing else than to be better prepared for next year.  Not sure I accomplished that goal very well, but I did get through it and called it a day in T2.
As bad as the race itself went, the trip was a lot of fun.  Big thank you to the "Lil Fish" for coming out to cheer and hang out.  Also to the housemates, Shelby, Branden, and Dave for an awesome group to stay with!!

Last but definitely not least, I'd like to wrap it up with a huge thank you to my sponsors who supported me through everything:  Sean and Champsys for the amazing (and incredibly stylish) racesuits and training gear,  Native Eyewear for my great glasses, Maxxis for the best tires out there, Nineteen and their awesome wetsuits, Extreme Endurance, Honeystinger, and Zipfizz for their wonderful products that kept me hydrated, fueled, recovered, strong and healthy.  Also big thanks to my coach Gareth Thomas for guiding me through the tough times and putting up with not a lot of good news coming in on the training logs!!

Throughout this year the reputed Chinese curse "May you live in interesting times" has often popped into my head.  Here's hoping for a much less interesting 2013!!!
Posted by Christine Jeffrey at 9:06 AM