Yep, it's been a while, but the giant reset button has been pressed and things are finally starting to get moving in the right direction again.  I won't go into much detail, but I took a bunch of time off after Xterra Worlds to let the mind and body heal, enjoyed a great Christmas back in Canada with the family and have since been slowly building the fitness levels back up.  I didn't think I would lose as much fitness as I did, but I guess that is what you get for growing old ;)

So fast forward to 2013!!  Still putting the pieces together, but got the season rolling with a shock to the nerves at the first race in the MBAA Arizona MTB series in January at McDowell Mountain Park.  I had a good 90mins in me, too bad the race was 110mins long.  Last 20 were pretty ugly, but you can't beat a day on the great trails at McDowell Mtn.  It did provide me with some extra motivation to get my butt in shape especially since 24hrs in the Old Pueblo was quickly approaching.

24hrs in the Old Pueblo.... finally got out to see what all the hubbub was about!! I was fortunate enough to be apart of the 5 person coed team "Rudy Project Retreads" with a great group of guys, Nils, Steve, Hunter, and Darron.  We even had uber mechanic Joe Devera in town to make sure the machines were running smooth all night long.  Yep, were are pretty special ;)  Headed out to 24hr town Friday night in time to get an easy lap in before Steve (executive chef!!) cooked us up some awesome grub.  Did I mention we also had a full RV?  If you are going to do a 24hr race this is definitely the way to go, mechanic, chef, RV and awesome peeps!!  We were even treated to a gorgeous sunset. 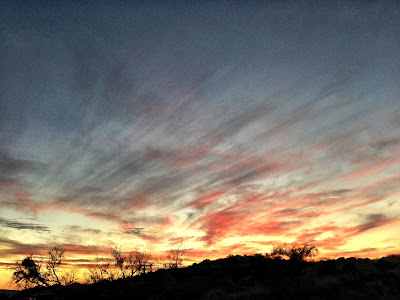 Saturday it was a leisurely up and at'em for the noon start.  The weather was turning out to be perfect, unlike the usual curse of this weekend, warm and dry with a pretty good wind though.  I was 2nd in the running order and started my first lap shortly after 1pm.  Ran into a bit of traffic but just snuck in under the 1:10 mark for a solid lap time.  We had a team goal of a place on the podium and were sitting just there in 5th going into the night laps.  My 2nd lap was full on dark and only my second time out on the mtb with lights, yeehaa.  Still a bunch of traffic, but rode clean and solid and after a good nap put in another good night lap at 1am.  As a team we were knocking out consistent laps like nobody's business and slowly moved ourselves up into a rock solid 3rd position by the end of the night.  (the first two teams in our division were the pro-squads from Stans NoTubes and Nationwide)

Soon enough it was Sunday morning and we were excited about getting in our last laps out on the course.  The wind had died down and the traffic had really thinned out and everyone turned in some serious lap times to hold onto our 3rd position, way to go TEAM!!  Results

Overall a great experience and lots of awesome riding.  Tons of great stories, memories and new friendships and already looking forward to next year!! Definitely a must do.  (Also put in the best straight 12hrs of sleep I have ever had Sunday night ;)

Huge thanks has to go out to Pro-Mechanics Joe and Myron for keeping our machines running smooth the whole 24hrs.  Also to Energy Towels, an absolute must have for between laps, especially in the middle of the night.  Thanks also to our team sponsor Rudy Project for the great gear and to Power Bar for the nutritional supplies.  Biggest thanks goes out to my team-mates who made the whole thing so much fun :))))

Not sure exactly what is up next but definitely lots of training miles to go!!

Posted by Christine Jeffrey at 2:56 PM