I never know how to start a blog post when I've left it so long without an update.  I really should make a habit of keeping it up to date, even when life isn't what you think or hope it should be.  Good thing is, it always seems to work itself out for the most part, or at least carry on.  Since it has been so long I will do a quick recap from where we left off, 24hrs in the Old Pueblo...

March went by in a bit of a whirlwind.  I spend most of the time on a work project for the Tucson Botanical Gardens called "Growdown".  Essentially four Tuscon Landscape Architect/Designers were selected and  tasked with designing a 15'x20' garden and building it in 24hrs, pretty much speed gardening.  It was a really fun, but amazingly exhausting experience and after three eight hour days out in the sun doing construction I was beat.  I narrowly missed winning the competition (one vote) but was super happy with how my garden turned out.  If you are in the Tucson area and interested, the gardens will be up for just a couple more weeks before they get dismantled.  A full write up about the event with lots of before/during/after photos is on our company website.

Other than the rattlesnakes waking up, not much else exciting happened in March, so let's move on to April.

April...
April I got back into the racing thing and started off the month with a last minute decision to race the Arizona MBAA XC Mountain bike race up in Prescott.  I headed up Friday and got to hang out with fellow Xterra racer Jaime Brede for a fun weekend of camping and bike racing!! This year has seen a big increase in the numbers for the women's pro/cat 1 field race making it so much more fun and exciting.  Chloe Woodruff was the class of the field and left us all in the dust, but Jaime, Kata Skaggs (another Xterra girl) and I fought it out until the very last lap.  Pretty sure my legs were about to fall off.  I followed that up with a quick transition run (ouch) then drove back down to Phoenix to meet up with Lisa Ribes and the first race of the AZ Open Water series in Tempe Town Lake Sunday morning.  We both got up early and did our long runs before jumping in for the 3k swim.  I am so lucky to be working with 2XU this year and wanted to get into my new awesome V3 wetsuit and try it out before the triathlon season got into full swing. In hindsight I packed WAY too much training/racing into the weekend, especially one week out of the Xterra series opener, and really paid the price in Vegas the next weekend.

Soooo Xterra West Champs rolled around and I decided to drive out instead of dealing with airlines, bike boxes, etc... I wasn't feeling horrible, but not great either in the couple of days leading up to the race.  I won't go into the course details, as by now the "Moonscape" that passes for a race course in Vegas has been beaten to death, uninspiring to say the least.  Race day rolled around and conditions were brutal, high temperatures and super high winds that nearly blew you off your bike (this isn't normal on a mountain bike).  I did my normal warm-up feeling pretty sluggish but hoped that jumping into the COLD water would wake me up.  I had a great swim, leading both the men and women out of the water, but then had nothing, and continued to have nothing for the entire race.  I contemplated dropping out more times than I can remember but couldn't bring myself to do it and ended up walking most of the 10k in to finish.  I have raced at the elite level 10yrs as a swimmer and going on 13yrs as a triathlete and this will go down as the hardest and worst race of my career.  The fact that I had a good swim makes things even more puzzling and I'm not sure I will ever figure out exactly what happened but it was definitely not my day.  I guess everyone has them every now and then but after the year I had in 2012 I was really hoping to get 2013 started off on a better note.

Not one to dwell on disappointments, I got back to Tucson, put my head down for some big training and signed up for the Whiskey 50 Off-Road mountain bike race in Prescott in the Pro division, why not;)  Turns out the start list was a comprehensive who's who of North American MTB racing.  If you are a mtber and haven't raced the Whiskey you absolutely need to put it on your schedule.  The weekend starts off on Friday night with the Pro Fat-tire Crit through the streets of downtown Prescott, lots of spectators, lots of fun, and lots of pain packed into a very short amount of time.  The amateurs head out on Saturday for their turn at either 25 or 50miles of pain and suffering and the Pro's get their turn at the full 50 on Sunday.  I was approaching this as a really hard day of training but also wanted to have a good race and ended up on the start line nervous and seriously wondering if I was completely out of my league!!  I also had forgotten sunscreen and was desperately walking through the spectators begging for some, duh.  As the last entry in I had number 52 out of 52 and joked that my goal was just to beat my plate number.

With over 7200ft of climbing I had to ride my own pace right from the start and I knew I wasn't going to take any chances of a spill on the technical stuff so was happy to find my own spot in the second half of the field.  I was super happy to ride solid the whole way and even started picking off girls on the 15mile climb out of Skull Valley.  My skills through the last sections of singletrack were seriously lacking, especially since I had not pre-ridden the course, but I got back into town safe, sound and happy in 30th!! 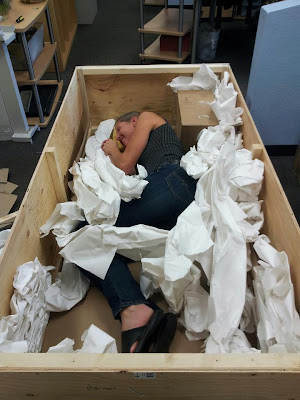 That pretty much brings April to a close, despite the boss's attempt to ship me back home!! (yes we do have a lot of fun even at work)  Lisa decided returning the plotter was probably a better decision and I got to stay;)  And since this is already a long post I will save my thankfully much happier Xterra Alabama race report for the next time!!!

Posted by Christine Jeffrey at 10:28 AM