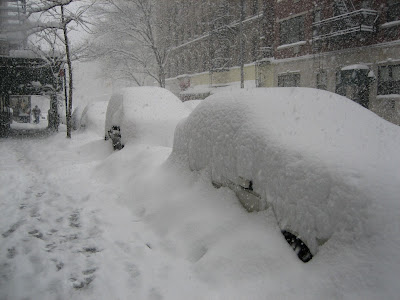 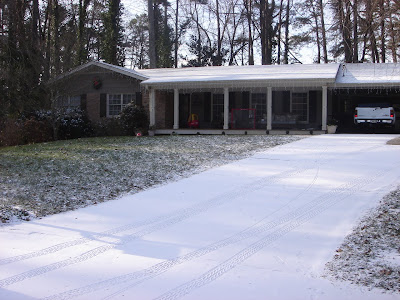 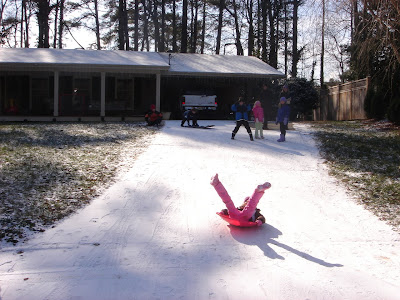 Today Atlanta got a slight dusting of snow and immediately declared a snow day and closed all the schools. Judging by the number of massive car pile-ups on the roads it was probably a good idea. I had to laugh at Alex and Sarah Rudder and the rest of the neighbourhood kids that got all dressed up in their winter snow suits and had a ton of fun sliding down the driveway.

Almost done the first week of serious training for 2010 and I am definitely feeling it. Last Saturday I rode the Snake Creek Gap MTB TT in Dalton Georgia and nearly froze my toes off. It took over 4.5 hours of riding, almost 5hrs total to get through it as I had to stop at both aid stations to thaw out my camelback straw that was frozen solid, my bottle only made it to slushy status. I thought my feet weren't doing to bad at the end until I changed out of my bike shoes and realized that they were frozen solid and I just couldn't feel them. They did hurt like crazy for the next couple of hours as they warmed up. The race goes again first Saturday of February and March and hopefully with better weather I can beat my best time from last year of just under 4hours total time.

After the race I headed south to Atlanta to stay with fellow Xterra triathlete Mark Rudder, his wife Vicki and two daughters Alex and Sarah. They have been taking great care of me and allowed me to take over their basement. I was hoping for some warmer weather to train in but have still manage to get out to the nearby trails to do some biking and running. It is always fun trying out new trails and for a big city Atlanta has several great areas to go play in the dirt. Mark and I are headed out for a long MTB ride tomorrow at the IMBA Chicopee Trails. From here it is on to Birmingham Alabama where I will be based for the next couple of weeks enjoying the great trails at Oak Mountain.

Posted by Christine Jeffrey at 8:47 PM